Put your shirt on, old man.

Just a brief thought today. That’s all I have time for these days anyway. Kellan downgraded to one nap a day in the last week and this has shut my workday (blog) right down. Right down to China Town.

Such is life as a WAHM. Work at Home Mom for those of you with as shotty a memory as mine.

This blog post comes from a note called “Old men with no shirts.” That was my reminder to myself. Tim peeked over my shoulder and saw it written on my Blog Note and chuckled.

Tim: Oh boy. The hell are you going with that one?

So. Onward and upward. (Downward, spiraling downward. Right into hell. Right onto Satan’s barbwire lap as a matter of fact.) While running to get groceries this past Sunday, Kellan and I drove by a couple old guys chatting at the end of a driveway.

Normally, this would not be enough to inspire a blog post.

Welp, it was this time.

You see, while the one dude was dressed as dapper as can be (ok, he was just wearing shorts and a teeshirt but whatever. Dapper is a fun word to say. Er, type.), his conversee (not a word) was not. Yes, he had pants on but he had no shirt. What he DID have was two gigantic man boobs. Too Mount Vesuviuses hanging so uncomfortably full and low-slung that they looked like they were about to erupt and spew volcanic lava all over his croc feet.

You can imagine how disturbing a visual this was.

I had planned on making eggplant parm for dinner, too, but couldn’t bring myself to touch the swollen, purple tube veggie once we got to the store.

So my thought is this. The sight of a fat old man without a shirt is just as shocking as an old topless woman. It should be frowned upon greatly and/or banned in our society.

Perhaps if an old geezer is thinking he’d like to go shirtless in public (this includes his own yard if there is a road/sidewalk/neighbor’s house/neighbor’s doghouse within sight), a special division of the police can pay him a visit with their measuring tape. If his man boobs droop past a certain level, he will not be able to go topless outside of his house without a hefty fine. If his front lobes meet the measurement requirements, he will indeed be allowed to enjoy the sun on his back. Simple as that. There’s your remedy. Ok, my remedy.

I mean, frankly, this guy’s hanging chest this past weekend was obscene. I’m pretty sure Kellan will never be the same (and I know I never will be). My poor baby boy’s innocence was stolen, ripped out of his infant hands by a bare chested man beast.

Naturally, I want to make sure this will never happen again to any other children in our community!

Are you with me?!

Here is an accurate depiction of the old shirtless bandit we saw. Courtesy of Kellan and me. Yeah, he’s up from his nap. Already. 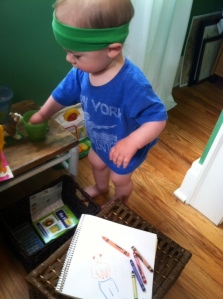 My drawing helper. Gotta love his get-up, sweatband and all. And the lack of pants. He’s still young enough to get away with a lack of clothing. Oh gad, am I raising a future shirtless old man???