This may upset some of you. The quote unquote animal lovers.

Moe, my English Bulldog, forces me outside with him on a nightly basis. Yes, you caught me, it’s actually vice versa, but it’s because I can’t take his flatulence any longer, not just physically smelling it, but emotionally and mentally, as it literally starts to affect my brain capacity when it seeps into my blood stream.

Moe keeps me out there, his backyard poop hostage, until I’m ranting and raving like a bath salts fanatic, gesturing wildly into the cold night air while pacing, stomping and pounding my feet into the wet, grassy and/or frigid, snow-covered ground. I spin off into this hissy fit as if it will have some positive effect on him. Like it will register in his dog brain: OH! Ok, I get it, I need to crap now because this is really upsetting you and you’d like to get back to bed. You have a meeting in the morning too? Plus it’s cold out here, huh? My bad. Jeesh, woof, sorry!

Said hissy fit, my pajama-covered arms and legs flailing under the moonlight, is likely mistaken time after time for some sort of mental-ward-escapee rain dance by the neighbors, who all, at some point in the process, end up peeping around their drawn curtains at me. How could they not? I just woke them from their peaceful slumber with my shrill “GO POOP!” cry.

The GO POOP command starts as a military order, shifts to a let’s-try-the-friendly-buddy/buddy-approach with an upbeat cheerleading voice, then spirals downward into a desperate plea, ending in total frustration on my part with a half-dozen J.C.s and a spattering of other fun curses when Moe simply refuses. And he refuses 9 nights out of 10. He would much rather trot back into the house, up the stairs, and gas up our room from the foot of the bed to the point where breathing through one’s nose is no longer an option [without extreme dehydration resulting from the immediate barfing reaction]. And once my lungs fill up on that putrid stink, every cell in my body wants to beat him up.

But I don’t. I don’t. Put down the phone and tell your husband to stop googling the number for P.E.T.A. I love Moe and I would never hurt him.

In fact, there is an upside to his l’eau de butt spray. I have found that I can leave whole areas of my body out to be exposed to it overnight and when I wake up, the hair is gone and my skin is exfoliated, looking ten years younger thanks to the free flying kibble particles. I never have to wax or shave the area again. The hair is wiped clean, right down to the follicle and my skin is baby-bottom smooth. Nair style. And you better believe it never grows back. (Nair. Man, do I have some good Experimenting With Nair stories from my teen years. Usually ending in pink, raised railroad tracks where eyebrows once lived.)

Anyway. Although Moe and I have had MANY a battle royal (these were especially heated when I was with-child and he had my fat, pregnant ass chasing him around the yard in the middle of the night during his prime farting time, PFT), I don’t blame Moe for his strong, defiant personality. I think it’s more his breed. An English Bulldog thing.

And while we’re on the topic, pet companies seriously need to make thicker poop-picker-upper bags. I can’t tell you how many slippery, steamy, hot-a meat-a-balls I have palmed through the ultra thin specifically-made-for-animal-dung bags. I’m beginning to think they use the same plastic-y latex for dog bags as they do for ultra sensitive condoms. Uh oh. Heading into uncharted, guilt-slapping waters. That is all I shall say about that. *Said in Dana Carvey’s Church Lady voice.

I shall conclude this post as follows. When I’m watching TV and I happen to catch an anti-stuffy nose/watery eyes/sneezy/congestion cough syrup commercial, all I can think is, damn, I want that. Those symptoms, that is. The nasty headcold. The sinuses packed solid with phlegm. I’d even take the weird, fat, green, snot-cartoon-guy and his family who set up a nice living room in the actor’s nasal cavity. Sign me up. Every night at 10pm. Then I wouldn’t have to smell the SICK oozing from my pet’s orifice every night while I’m trying to catch some Zs. 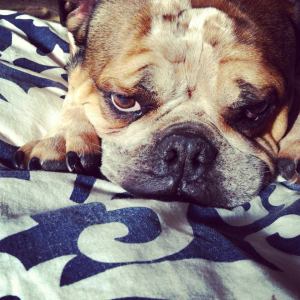 Don’t be fooled by this sweet face. This animal produces a scent that could knock your socks off, feet and all.

This entry was posted in Uncategorized. Bookmark the permalink.