“You’re not yourself when you’re hungry.” You have no idea, Snickers.

Dramatic Lifetime Movie Side Note: Thank you, Westhill School District substitute teachers for the debilitating lifelong name complex. So what, everybody has had their name butchered at one point or another. Stop belly-aching. Well I bet not everyone has been mistaken for the opposite sex because of that pronunciation.

I’d like to say it ended with high school, but there was an incident just a few years ago while I was living in San Francisco. Picture me now, but with less worry lines playing tic-tac-toe across my face. A.k.a. pre-baby, pre-hubby, pre-real world. Ahh, life was easy. Not that I thought so at the time. Anyway, I was waiting for a prescription to be filled when I heard the name “Dell Belding” as in “Will a Mr. Dell Belding please report to the pharmacy? Mr. Dell Belding, to the pharmacy, please?”

That was by far the most ridiculously awesome obliteration of my name to date. I stepped right up and slapped the pharmacist high five [ACROSS his FACE. Just kidding. I shy away from confrontation. Don’t take advantage of me because of it. Shit, I’ve told you too much.]

I come from a long line of proud English strongmen. In fact, my Great Great Grandpa Beadling once arm-wrestled and beat the then Strongest Man in the World, according to my father. And we Beadlings are many things [middle-of-the-night sweaters, attention-hogs, self-proclaimed comedians, health freaks with insatiable sweet tooths, impatient SOBs], but we’re not liars so quit making that you’re-full-of-malarchy-nell face at your screen. It happened. Accept it or go back to aimlessly scrolling your Facebook newsfeed.

Ahem. But again. Let’s get back to the initial seedling of a reason for this blog entry: To alert you of one of the most, if not THE most important things about Beadlings.

We are the reason for the word hangry. We give the word meaning. Without us? It’s just another silly, trendy slang adjective. With us? It. Is. A. Threat.

By the way. Hangry = hungry + angry, if you live under a rock.

Look it up on any of those ancestry sites, and you’ll see the word must have sprouted at the same time as the original Beadling Family Tree.

Beadlings’ stomach cavities should never be allowed to be empty. It’s bad for society. Like parrots, we must be fed a lightweight salted cracker every 15 minutes. We need an IV of sugar-water coursing into our veins at all times. We have to elect someone around us to grind up a fine powder of Flintstone vitamins for us to snort like coke every hour on the hour.

Am I clear enough on this? Or ELSE.

We turn into hulk-like wildebeests, ravaging whole neighborhoods for vittles, foaming at the mouth and swatting anything and anyone in our path. By the time the police have been called, it’s too late. Our words turn into a thick, moaning howl like a dying, prehistoric, beached werewolf-whale. (Tune into Nat Geo once in a while if you don’t believe me. These things exist.) We snort and grunt and stomp around, pounding on our belly and gesturing using a primitive sign language to indicate the gaping, famished hole in it.

The problem is, only Beadlings can understand this savage sign language.

Our friends, our loved ones, our significant others. Even our children and pets. They are all left cowering in the corner, shivering and shaking, hiding away from us until we have ingested a morsel of granola and morph back into our human bodies. My dog even offered me a piece of his kibble once. It was a breathtaking moment.

I cannot count on my fingers and toes the number of times my sister-in-law in San Francisco has had to frantically Facetime me to show me my brother’s gestures so that I could translate what he was trying to say. As it turns out, he craves sushi a lot. Otherwise, he’s signing for Oreos (Trader Joe’s all natural ones, of course. We’re werewolves, not pigs. Kidding, kidding. My hubby and I buy that garbage more often than I’d like to admit. Me likey the high fructose.)

So, that’s my story. And I’m sticking to it, as Colin Quinn used to say on SNL’s Weekend Update circa the late ’90s (my high school years – when I stuffed my face with late night brownies and dreamt of being on that show. I still do. Both. Sighhhh.)

Happy ending: If you ever hear a faint rustling outside your home, fret not. Grab your children, lock them in a secure, windowless room without a trace of food, and leave a peanut butter and jelly sandwich on wheat CUT IN QUARTERS [we can down it quicker that way] on your front steps, and for gawd’s sake, do NOT mispronounce the Beadling as a Bedling. Talk about angering the beast. Do all this and I promise you, you and your family will be left unscathed. 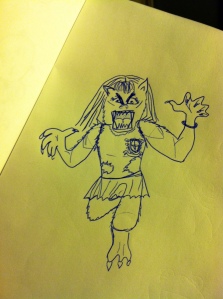 Now THAT is a serious she-wolf. Or me-wolf. Still wearing the skank skirt. Note the Beadling Family Crest on my shirt, also. And I’m still wearing my Jawbone UP band. Gotta count all my steps when I’m running around town pillaging and whatnot. Feed me.

This entry was posted in Uncategorized. Bookmark the permalink.

3 Responses to “You’re not yourself when you’re hungry.” You have no idea, Snickers.